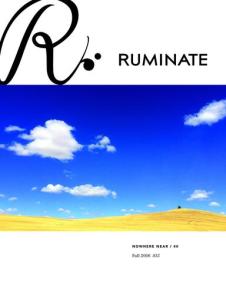 In late June, I learned that my poem “Yellow” won the 2016 Janet McCabe Poetry Prize at Ruminate Magazine. The poem will be published in the September 2016 issue.

Ruminate is one of my favorite publications, and its arrival in my mailbox is one of the small but great pleasures in my life.

It’s beautiful. It’s print. It still comes in the mail. And it’s quarterly, which means several months of anticipation between issues– a novelty in an age when it seems we hardly have to wait to read anything anymore.

I love how each issue takes shape around themes in a life of faith that sometimes go under-explored. I love the visual art it has brought into my life. Though my sister is a talented visual artist, and I always feel enriched on a different level when I make space for it in my life, I confess that I just don’t make that space on my own. So the magazine is a good reminder to make the time.

I first discovered Ruminate in 2010 or so, at Matter bookstore in Fort Collins, CO, where the journal is based. Since then I’ve become a subscriber, and this past year I became a supporter, when the journal ran a brave 10-day fundraiser to keep its doors open by paying its staff a sustainable living wage.

“Yellow” has been four years in the making, one of those poems I’ve written and rewritten and put away for a while and rewritten. I’m finally finished with it. And I am so happy to see it find a home in the pages of a journal that feels like home to me. I am also so grateful for the incredible gift of funds. I am furiously working to get my chapbook out into the world, write new poems, and built a freelance writing career, and I plan to invest the prize money back into my writing– for childcare, workshops, and books. For a one-income family with a little girl who is starting to eat SO MUCH, this is an incredible help.

And I will confess to heart-thumping astonishment (and maybe some nervous nausea?) when I read what contest judge Alice Fulton said about the poem. Fulton is an incredible poet whose work I deeply admire. It is a little surreal to read her words about something I wrote, something so stitched through with image and memory from my life.

Thank you, Ms. Fulton, and thank you Ruminate.